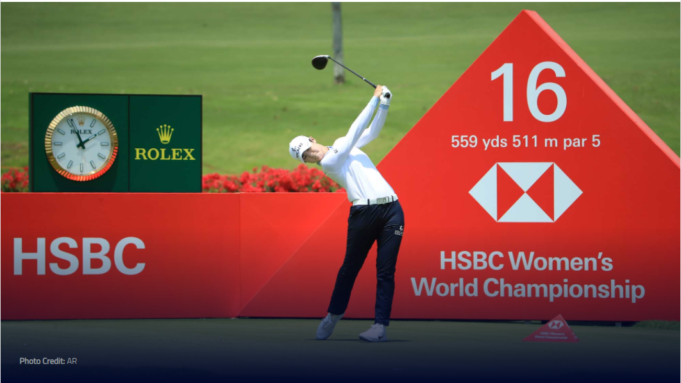 HSBC Women’s World Championship is a part of the LPGA tour. It was first held in 2008 at Tanah Merah Country Club Garden Course in Eastern Singapore. Since 2013, the tournament has been held at Sentosa Golf Club in Sentosa. But there were hiccups encountered by this tournament as well as the rest of the world sports community. The Golf tournament was cancelled in 2020 due to Covid-19 pandemic worldwide.

This year, the HSBC Women’s World Championship started on 28th April and went on till 2nd May. The purse for the tournament amounted to $1.6million. On 2nd May, Sunday, Kim Hyo-joo from South Korea won the tournament after a close fight. The second placed Hannah Green from Australia bogeyed the last two holes and paved the way for Kim Hyo-joo to victory. Green had been third while going into the final round of the competition. She kept herself as contender for the trophy with a pair of birdies on the front nine. She also hit an eagle on the 14th. This made her level with Kim.

Green was one of the crowd and community favourites to win the trophy before she bogeyed the final two holes. Kim showed remarkable composure and calmness of mind to overturn a five-stroke deficit on the final day. She opened with four straight pars which saw her rising up the leaderboard. She had four birdies in five-hole stretch from the fifth. She followed this back with back-to-back gains from the 11th with successive birdies from the 13th and closing out a bogey-free winning round.

This is Kim’s fourth LPGA Tour title and is also her first since 2016.

Meanwhile, Kiwi player Lydia Ko was disappointed with her putter and finished tied for seventh in the competition. She was six shots behind Kim. Seven time major champion Inbee Park posted back-to-back 70s over the weekend to end two behind in tied fourth with Patty Tavatanakit. So Yeon Ryu finished further three strokes back in the sixth position. After the victory, Kim stated that her aim this year was to win a trophy. She won her last trophy in 2016 with Pure Silk-Bahamas LPGA Classic. She was visibly happy to achieve her aim. Lin Xiyu started the final day with a slender lead but ultimately finished in third.

Meanwhile, Hannah Green blamed her nervousness for her performance in the tail end of the tournament. She is hopeful to continue her form this year and to finish much better in next tournaments.

The NFC East Championship: Preview Of Franchises, Their Chances Of Division Title In NFL 2021 Season