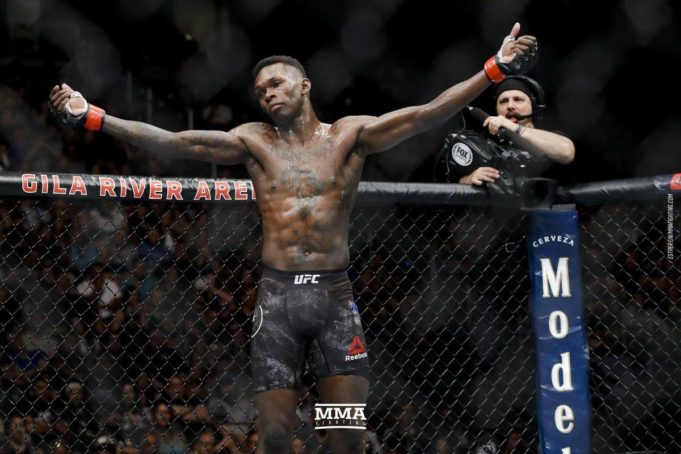 Known as ‘The last style bender’ Israel Adesanya has emerged to be one of UFC’s modern-day phenomena. This Nigerian-born Kiwi fighter has become one of the biggest stars of the fabled octagon and has gone on to win and retain the UFC middleweight championship. Set for an epic showdown against the Polish prodigy Jan Blachowicz, Israel Adesanya is a 31-year old mixed martial artist who wants to make the most of the main event featuring him and Blachowicz on UFC 259.

Israel Adesanya has a superb charismatic presence outside the ring while being a dominant force inside the ring, bludgeoning his opponents and successfully defending his title. It has also made him one of the biggest fan favorites that the UFC has till now. The 1.93 meters height is superbly complemented by his 208 cm reach, which makes Israel Adesanya one of the fiercest and merciless combatants in the UFC. The champion kick-started his 2020 career in style, defeating Yoel Romero and following it up with a brilliant TKO victory against the dangerous Paulo Costa, thereby sealing a successful double title defense.

Since his UFC debut in 2018, Israel Adesanya has grabbed the laurels and banked really lucrative match earnings. The UFC 221 saw Israel Adesanya’s professional debut where he bagged home a total earning of 153,000 USD, including a 50,000 USD bonus for the performance of the night. He TKO Rob Wilkinson on his debut!

But it was just the start. Israel Adesanya started hauling enormous sums for his winnings, performance, and promotional bonuses, along with the guaranteed payments. The biggest hike in the winning amount came when he demolished Kelvin Gastelum for the interim UFC middleweight championship in five-round marathon combat! The Nigerian-born Kiwi fighter bagged home a sum of 430,000 USD that included a 50,000 performance of the night bonus and a 30,000 fight week incentive.

When Israel Adesanya made short work of Robert Whittaker for his middleweight title, the bounty amount was gigantic! The 490,000 USD sum contained a 50,000 performance of the night bonus and a 40,000 fight week incentive, apart from the guaranteed money, the winning, and the promotional bonus. The first successful title defense against Yoel Romero saw Israel climb the ladder further and grab more than half a million dollars! The 540,000 sum was the first half-million in his career, containing a 40,000 USD fight week incentive.

As the battle drums start thumping, all eyes are on UFC 259 and whether Israel Adesanya can become a successful double-division champion by defeating Jan Blachowicz in the light heavyweight division.