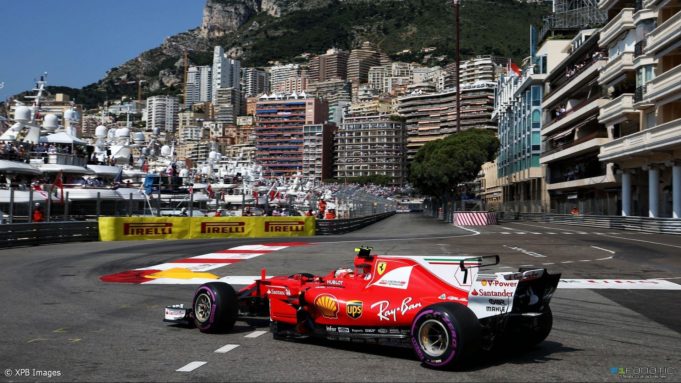 The Monte Carlo street circuit at Monaco has been the witness of some of the most astonishing results throughout Formula One history. The wave of the chequered flag at the Circuit de Monaco elevates the heart rate of all F1 fans across the world with high-octane action being the trademark of the circuit. This year will be no different, and maybe it will be one of the most entertaining races in one of the dreamiest landscapes of the world.

The Monaco Grand Prix started with some very very unexpected results at the Circuit de Monaco. The surprise first in the qualifying race was Charles Leclerc who obtained the pole position in his home turf despite hitting the barriers in the final lap.

But this was not the only surprise. This year, all the previous races have been an entertaining rivalry between Red Bull’s Max Verstappen and Mercedes’ Lewis Hamilton. While Max Verstappen has been closely trailing behind his arch-rival, Lewis Hamilton showed the racing universe who’s the boss by claiming the top spot at the podium in the Barcelona Grand Prix. However, the Monegasque Charles Leclerc has been holding the Ferrari banner high with his Scuderia Ferrari teammate Carlos Sainz Jr. giving him the ideal support.

While Verstappen stood in second position behind Leclerc after the qualifying race in Monaco, Hamilton finished seventh. This was believed to be due to some set-up changes to Hamilton’s Mercedes car. Hamilton has been very rarely critical about his team in public over his entire glittering Formula One career. He admitted that they need to sit down to have ‘tough discussions’ after Saturday’s race. Hamilton was leading Verstappen by 14 points before the Monaco Grand Prix started. If their position doesn’t change in Sunday’s race, then Verstappen will be only two points behind Hamilton after the end of the Monaco Grand Prix.

The final day showdown reaches a sensational high ground with issues over the Ferrari gearbox and unexpected positions of some drivers:

Traditionally, overtaking is always taken as a harder feat to be achieved on Monaco’s circuit. Amidst all these, Hamilton/Verstappen and Mercedes/Red Bull rivalry, Leclerc produced a truly dramatic result for his team, Ferrari. Ferrari finished in their lowest position since 1980 in the previous season. Charles Leclerc hit the barriers ending the session on his final hot lap in Monaco. This was compared to Michael Schumacher’s halt to deliberately end the season here in his favour in 2006. But Leclerc waved away such comparisons. He had to wait anxiously after the race to assess the damage in the rear of his Scuderia Ferrari vehicle. The rule is that if a gearbox replacement had to be done, Charles would lose the pole position due to five points grid penalty. Ferrari’s team has opined that the car’s gearbox hasn’t sustained any serious damage according to the latest news. The car will again be assessed before the beginning of the Sunday’s race.

Sunday’s race in Monaco Grand Prix is bound to be an exciting affair. Valtteri Bottas came in third for Mercedes after Verstappen while Ferrari’s Carlos Sainz Jr. took the fourth position. McLaren’s Lando Norris is fifth while Alpha Tauri’s Pierre Gasly stood in sixth position after the qualifying race. Sebastian Vettel came in the eighth position following Mercedes’ Lewis Hamilton. However, Hamilton’s stablemate at McLaren-Mercedes- the 31 years old Australian Daniel Ricciardo who won the Monaco Grand Prix in 2018 finished in the 12th position in the qualifying race and complained about the messy qualifiers. The Aussie denied the possibility of him being such a slowpoke as displayed by his grid position in the qualifying race. Now, all eyes will be on how the race plays out today in Monaco, which may influence this year’s title race dramatically.

With every F1 fan waiting with bated breath for the results of the Monaco Grand Prix main race, let’s list the 3 best live stream options to witness the immersive action from the historical circuit.

Since F1 TV is the dedicated streaming service for every F1 Grand Prix, it definitely provides the fastest streaming speed along with the most vivid quality. But apart from this, there are several other tv-streaming services which will let you cut the cord and go for comprehensive viewing packages without incurring the subscription charges for cable connection.

Other live stream options for the Monaco Grand Prix 2021:

How to watch the Monaco Grand Prix in the UK?

Sky Sports will be your ultimate companion that live streams the Monaco Grand Prix for the British fans. While the basic Sky Sports Pack 1 bundle comes at 5.99 GBP monthly and gives you access to 4 channels, the more holistic Sky Sports Pack 2 gives you access to the above 4 and 5 other channels at just 10.99 GBP per month. However, you can also opt for the NOW TV Sky Sports passes for live streaming service. The day pass costs 9.99 GBP, the weekly pass comes with a price tag of 14.99 GBP whereas the monthly pass costs 33.99 GBP. On the other hand, the Sky Sports mobile app costs just 5.99 GBP monthly.

How to watch the Monaco Grand Prix in the US?

ESPN+ is unarguably the best option to live stream the Monaco Grand Prix in the US at just 5.99 USD monthly subscription charge. You can get the ESPN network in oft-preferred TV streaming services like-

Apart from these, F1 TV Pro package coming at 79.99 USD subscription charge per season and the F1 TV Access package priced at 26.99 USD per month could be your go-to options to live stream the Grand Prix in the US.

How to watch the Monaco Grand Prix in Canada?

Apart from the compelling F1 TV service, Canadians have the bliss of live streaming the Monaco Grand Prix 2021 via the English language-based TSN or the French language-based RDS that come with a pay TV package. The streaming services are, however, very appealing, with both the TSN Direct and RDS Direct costing just 4.99 CAD each day or 19.99 CAD per month.

How to watch the Monaco Grand Prix in Australia?

How to watch the Monaco Grand Prix in New Zealand?

For the Kiwis, Spark Sport presents this superb opportunity of live streaming the Monaco Grand Prix 2021. The basic package costs just 19.99 NZD and has a 7-day free trial period.

How to watch the Monaco Grand Prix from different parts of the world?

If you are in some farthest corner of the world or quarantined outside your home country during this pandemic, you might be scared of losing out from all the action of the Monaco Grand Prix. However, that is not true! You have a series of options available in the form of superb VPN service providers. ExpressVPN, CyberGhost and NordVPN are some of the most exciting choices in the form of VPNs that enable you to mask your IP address and overcome any geo-block that has been restricting you from live streaming your favorite Grand Prix race of the season!

Though there are no official free live stream options for the Monaco Grand Prix 2021 apart from Channel 4 in the UK, Match TV in Russia and Servus TV and ORF in Austria, you can choose some of the above-mentioned tv-streaming service packages and bundles deftly that come with a limited period free trial. After watching the race, you can terminate the subscription, and hence, you will have to bear no expenses.

How to watch the Monaco Grand Prix 2021 on social media with particular focus on Reddit?

Social media platforms have come up as comprehensive live stream options for some of the most immersive sports content these days. Amongst them, the brilliant American social platform cum discussion platform Reddit also offers live streams of amazing sports, entertainment and news contents. You simply have to find the relevant subreddit that does the job. Download the app for free or visit the website, sign up and login with your credentials and find that particular subreddit that contains the live links uploaded by Redditers across the globe. Once you reach that, find those live links that are not flagged or taken down by the official broadcasters and you can enjoy the high-octane action free of cost!