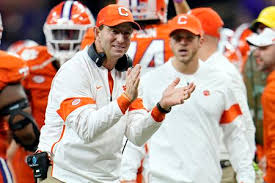 The entire US is burning with racism issues. Everybody knows how bad things have become. However, there are additional controversies that keep popping up and add more fire to the inferno.

One such controversy was stirred by Dabo Swinney when during a television show he shared a 14-minute long video to show his support for the black lives matter campaign. He also defended the scandalous 2017 behaviour of his assistant Danny Pearman who had uttered racial slurs and curse.

What is it All About?

The fact of the situation is that Swinney now projects an image of having double standards. Many times in media he has been portraying himself as a person who is against racism. That’s a good thing, to begin with however when it comes to executing his words there seems to be a huge shortfall.

He is always vocal about strict actions to be taken against those who use racial slurs like “Nigger” or “N” word, however, there have been instances when such matters when reported to him were hushed under the carpet in private.

When confronted by media on such behaviour, there was never a satisfactory answer coming from his side. This was brought to the public notice by Kanyon Tuttle when he tweeted about it. All Swinney has to say on his tweet was that he handled the Pearson case with care. Then adding that forgiveness is a big trait and he practised it. However, for the public this was far from what they had expected.

One thing that we must add here is that the country is burning because of racism. This is the time to show the world that we are united against it. Stirring further controversies will not resolve anything. This is something that we all need to handle with unity. Its time to rise again and shine.