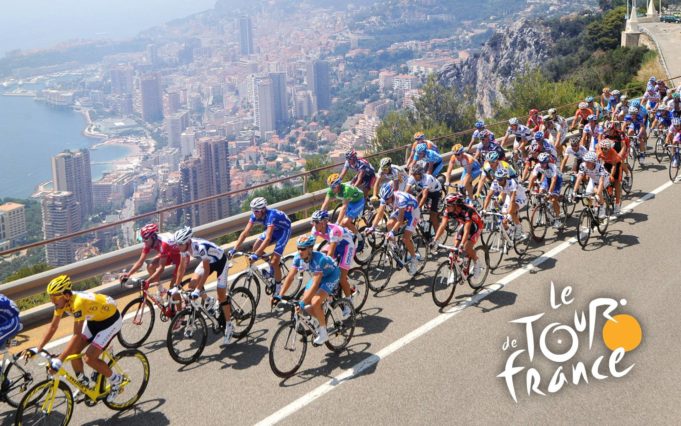 Touted as the most prestigious bicycle race in the world, the Tour de France is well known for its challenging setup.

Well over a century old, this racing event has been hosted annually every year since its inception in 1903. The only times it was stopped was during the two world wars.

2020 has been a significantly bizarre year with the worldwide virus outbreak putting a break on almost every major event on the planet. Finally after being postponed for two months, the Tour de France 2020 will be commencing.

Date and location of start:

The 107th edition of the Tour de France is scheduled to start off on Saturday, 29th August, 2020.The Grand Depart will take place at Nice. This is the second time after 1981, that this city will be hosting the Grand Depart.

We are listing out some options for viewers all over the world to watch the Tour de France.

Watching the broadcast in France:

The Tour de France will be broadcasted by France TV Sport in the country. You can also visit the site sport.francetvinfo.fr on the race days and watch the live streaming from anywhere.

Watching the broadcast from Italy:

Rai will be the channel to live broadcast the races in Italy.All you need to do is visit www.raiplay.it/dirette and login with your account to watch the races. If you don’t already have an account then you need to create a new one.

Watching the broadcast from other European countries:

In many European countries like Belgium, Spain, Germany, UK etc. Eurosport will be broadcasting the Tour de France. If you own cable TV subscription then you can watch the races from your television. Otherwise you need to go to the website eurosportplayer.com, create an account and buy a subscription. Then you can stream from their site on any compatible device of your choice.

Watching the broadcast from the USA:

NBC Sports owns the right to broadcasting the races in the US. Firstly you would need a TV provider like DirecTV, DISH or Sling TV. You can buy a cable package with NBC Sports included from these providers.If you’re not staying home or want to stream from a mobile device, you have to visit www.nbc.com/live and create an account or log in through an existing account to view the races broadcasted live. The NBC Sports App is also available on Apple iOS and tvOS, Android, Amazon Fire TV, Roku, and Chromecast.

If you are an enthusiast of bicycle races, you might wanna check out NBC’s Cycling Pass available on NBC Sports Gold for $ 54.99. It comes with additional features like tracking the races through GPS, real-time commentary, comprehensive rider profiles, full replays, interviews and much more.

Watching the broadcast in Canada:

In Canada the races will be broadcasted by Sportsnet.You can also visit flosports.tv to create an account and purchase a subscription. However you will need a Canadian credit card.

Watching the races from New Zealand and Australia:

The official broadcasting partner for the Tour de France in these two countries is SBS. If you have a cable TV subscription containing SBS then you can watch the races on your TV.Visiting www.sbs.com.au will allow you to create an account and purchase the necessary subscription to watch the races.

If you are a citizen of some other country than the ones mentioned here, or you are a resident of these countries but currently abroad, then you might find these sites and channels unavailable at your location. Using a good VPN software like ExpressVPN or NordVPN will allow you to mask your own IP and simulate the IP address of one of these countries and use the facilities accessible on those servers.

Reddit users can always look for subreddits related to the Tour de France. There is always a chance that someone uploads a streaming link which allows you to watch the races live for free.