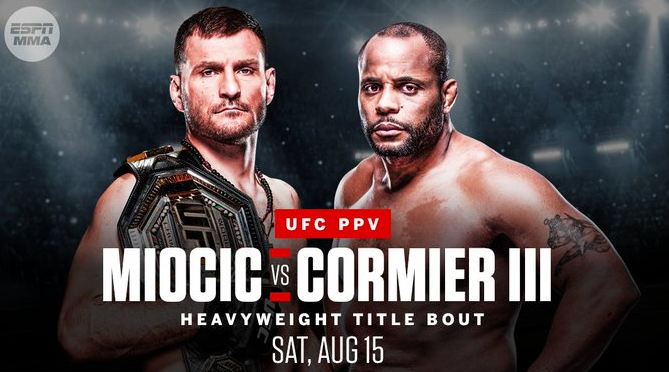 Take a sneak peek at the action that’s about to unleash as UFC 252 draws near.

UFC 252 on 15th August promises plenty to the fans as UFC returns to APEX, Las Vegas behind closed doors.

The Main Card will feature five fights, along with numerous other preliminary and Early Prelims matches.

The night will be glittering special as Stipe Miocic will face off against Daniel ‘DC’ Cormier in what’s set to be the main event. The Heavyweight Championship will be put online. The competitors will be extremely aware of their opponents as they’re well familiar with each other’s ways, having faced each other twice before. Both men have won one fight each, with Miocic winning the latest one,in 2019.

The fight is an extremely anticipated one among the fans, given the precedence between them. It’s being speculated that the 41-year-old Cormier, who has been bidding on his time, might be fighting his final match. He earlier mentioned how he envisions to hang up his boots at 40, so seeing him push on for another year has fuelled the rumors.

Miocic, who had to undergo eye surgery after the damage suffered from Cormier’s pokes looks to win two matches against the Heavyweight Champion Daniel ‘DC’ Cormier for the title.

To complement this bout between two legends, one more heavyweight fight is scheduled for the night. Jairzinho Rozenstruik and Junior Dos Santos are scheduled to lock horns in the octagon. They have never faced each other but share a close connection as they train in the same gym.

Understandably, the two men have never trained with each other despite the gym connection and it was recently revealed that Junior Dos Santos, the Brazilian fighter offered his opponent to train together. An offer that Rozenstruik declined but also said that he respects JDS; sparring together is a bit too much familiarity but he respects the offer and it was nice of him. The two men who share a mutual respect for each other are scheduled to face each other and the fans will be curious to see how it pans out.

In the Co-Main event, newcomer Sean O’Malley will be squaring up against Marlon Vera. Sean, the Irishman, is being hyped lately by UFC fans as a special fighter. The hype is not unjustified as he has defeated his previous four UFC opponents, knocking out the last two without much fuss, making it look almost too easy for him.

O’Maley, however, expects a tougher test against the Ecuadorian fighter who is a black belt in Brazilian Jiu-jitsu.

Right now, there’s no end visible to O’Maley’s confidence judging on the fact that despite Vera being a veteran, he thinks he’ll be able to knock him out like his previous bouts.

Talks about the Irishman riding a hype train who’d fall to a defeat sooner than later has not dissipated completely and UFC 252 might provide a conclusion to this discussion.

Definitely one to look forward to:

Alongside the aforementioned, lightweight bout between Magomed Ankalaev (13-1-0) and Ion Cutelaba (10-5-01NC) is scheduled, along with a bantamweight match between John Dodson (22-11-0) and Merab Dvalishvili (11-4-0).

With jam-packed action and lots at stake, UFC 252 is sure to be an enthralling event, drawing the attention of fans all over the world.