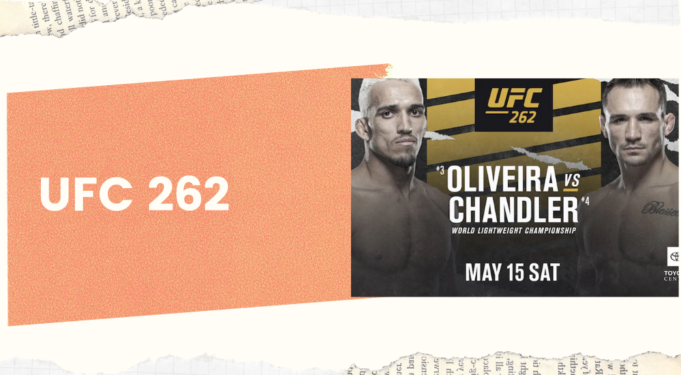 UFC 262 is coming with a host of fights and lots of entertainment. The events on the main card are scheduled to take place on 15th May 2021 at Toyota Center in Houston, Texas. The fights in Preliminary and Early Preliminary cards will take place at the same venue on the subsequent day i.e. 16th May. The details of every fight is given below-

Main Event- The main card will feature a title fight between Brazilian Charles Oliveira and Former Bellator Lightweight champion Michael Chandler in the lightweight category. Oliveira was ranked at no.3 in the lightweight division recently and has been fighting in UFC since 2010. Chandler is a veteran Mixed Martial Arts fighter who debuted earlier this year in UFC. This is going to be only the second UFC fight for him.

Co-main event- The main card also features a fight between Tony Ferguson and Beneil Dariush in the lightweight category. Ferguson is a veteran UFC lightweight fighter. Despite his consistently good performance, Ferguson is still without a title in the division. His search for the title will face an important test against Dariush, who is a tough opponent who has won 20 of his 25 fights in his career.

Fight #3- The main card also has a scheduled fight between Jack Hermansson and Edmen Shahbazyan aka The Golden Boy in the middleweight category.

Fight #4- The fourth fight of the night will see American Mixed Martial Artist Katlyn Chookagian fighting against Brazilian fighter Vivian ‘Vivi’ Araujo in the women’s flyweight division. Katlyn used to fight in the bantamweight division of UFC, only being recently promoted to the flyweight division. Araujo won her previous fight against Roxanne Modafferi earlier this year in January.

Fight #5- The last fight of the night will see Shane Burgos going against Edson Barboza in the featherweight division.

Apart from the main card, UFC 262 will also feature a bunch of fights as part of the preliminary card and early prelim card. This will take place on 16th May at the same venue.

Fight #1- The first fight in the Preliminary card will feature a fight between Ronaldo Souza and Andre Muniz in the middleweight division.

Fight #2- The second fight in the Preliminary card will see Matthew Christopher Schnell aka Danger going against Rogerio Bontorin in the bantamweight division.

Fight #3- In the last fight in the Preliminary card Lando Vannata will go against Mike Grundy.

Fight #1- Jordan Wright will fight Jamie Pickett in the middleweight division. This is one of the most coveted events in the early Prelim card.

Fight #2- The second fight in the early prelim card will see Gina Mazany fighting Priscila Cachoeira in the women flyweight division. Cachoeira recently missed weight for a fight against Cortney Casey and will be eager to bounce back against Mazany, who recently won against Rachael Ostovich.

Fight #3- In the last fight in the early prelim card, Kevin Aguilar will fight Tucker Lutz in the featherweight category.

UFC had taken the leap of faith last year when they decided to resume the high-octane action without in-stadium audience presence. Since then, it has never looked back! A lot of superb fights have happened over the last year and the high-octane action has been enjoyed by millions across the globe. PPV and in-person audiences have also happened over time. Undoubtedly, UFC 262 will offer another eventful night in UFC history with the main interest focused on the lightweight title fight between Oliveira and Chandler.