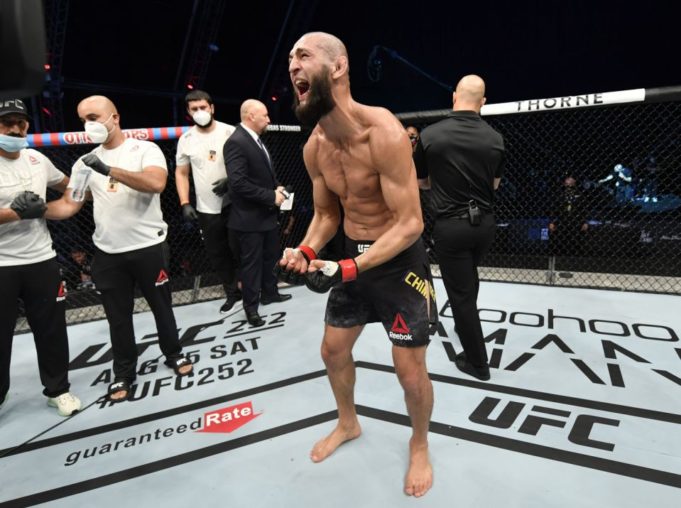 In Khamzat Chimaev’s UFC debut last week the Russian born fighter who now lives in Sweden defeated John Philips through submission. At the opening bell, Chimaev who was fighting at middleweight instead of his natural welterweight used a head kick at the opening bell. He then took Philips down to the side of the cage where his coaches sat.

Although the fight was over the instant Philips’s back touched the canvas, Chimaev did the right thing in keeping pressure on Philips. He used a total of 143 strikes on Philips while only absorbing 2 himself.

Taking Philips to his corner the Chechen-born brawler attacked him so ferociously that one of the judges awarded the round 10-7 for Chimaev. Although he defeated Philips by submission in the second round, he asserted that it did not surprise him that Philips escaped the first round.

What the fighting world feels about Chimaev

Alexander Gustafsson has boldly asserted that Chimaev- his main sparring-cum-training partner; will go on to be a future world champion. Gustafsson who trains in Allstars Gym with Chimaev blurted out,

“Very good, he’s a future world champion for sure” and that “He loves this, this is his life. He’s gonna go all the way. He is my main sparring partner right now. He pushes me all day.”

Chimaev performed so well that he was already being compared to the legendary UFC light heavyweight champion Khabib Nurmagomedov and has been dubbed “Khabib 2.0”. Apart from both being managed by Ali Abdelaziz, the connection does not exceed beyond that.

Chimaev said that he met Khabib Nurmagomedov just once and it was a brief interaction. Nevertheless, Khabib has definitely had a resonating influence over his fighting style. Chimaev commented about Khabib that,

“I don’t know him at all” and that “Of course everyone knows who he is. He was at one of my fights and he said, ‘Good job brother. You are good.’ But if people say I can fight like him, it’s OK.”

Although Ali Abdelaziz has a deep roster that is full and thriving with UFC Champions, he believes that it is better that one does not overlook Chimaev. Abdelaziz believes that,

“Believe me, this guy is a future champion” and added that “He’s a killer and he can do it all.”

After getting the win, Chimaev went on to comment that,

“Down in weight is much better for me. I want to be a champion at welterweight, I’m going to be a champion in that,” he added that “I never felt in trouble, I do this with all my opponents, I smash them all, first round, second round. I have seven wins, seven finishes. I could fight next week if they have. I told them, give me Donald Cerrone, if they give me, it’d be an amazing fight for me. I’m gonna smash him and everybody is going to talk about it.”

Chimaev remarked about his recent opponent that,

“He’s a tough guy.” And added that, “He’s in the UFC and when you are in the UFC, you have to be tough. I don’t expect guys just to [submit] right away. I had to tire him and then I could submit him.”

Chimaev also called out Mike Perry immediately after his fight who the UFC is presently disciplining after he allegedly hit an older man in an incident at a restaurant. Chimaev also added that given the chance, he would like to take on Robbie Lawler and Donald Cerrone as well. Chimaev who is based out of Sweden now has already commenced speaking fluent English. He is adapting quickly and is learning who and how to promote as well. Therefore he did not hesitate to criticize Perry. He said that,

“Mike Perry, just an idiot.” And added that, “You don’t hit old men. That’s not what we do. Do you want to fight? Come fight me. I’ll show you something.”