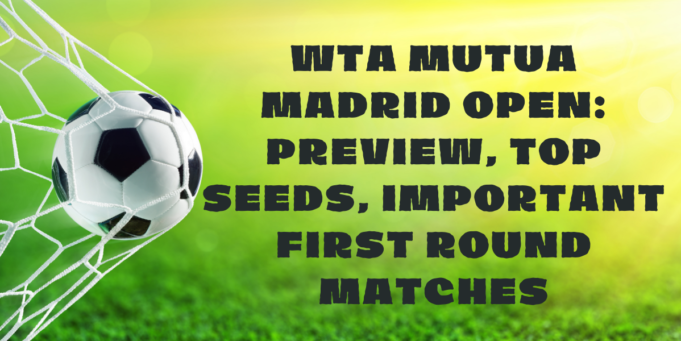 The WTA Mutua Madrid Open 2021 started on 29th April. It will go on till 8th May. It is the 19th edition of the tournament on the ATP Tour and the 12th on the WTA Tour. The clay season in tennis started with two WTA 500 events, Volvo Car Open and Porsche Tennis Grand Prix in Stuttgart, this year. Madrid Open is the first WTA 1000 event followed by Internazionali BNL d’Italia, another WTA 1000 event. French Open will start on 24th May.

The tournament will see 64-players singles draw and 30-teams doubles draw on the clay court this season. Both singles and doubles draws will be played on 8th May. The clay court in Caja Magica is said to instill belief and confidence in players in the excellent but unique conditions in Madrid. The main draw for the event consists of 17 names from the current Top 20 rankings. Ashleigh Barty leads the draw as she comes into Madrid after her victory in Stuttgart. Barty recently overtook Naomi Osaka, who is World No. 2 now, on the Porsche Race to Shenzhen Leaderboard. This will be Naomi Osaka’s first tournament after the Miami Open and also her first clay event since Roland Garros 2019.

Top eight seeds for the event is as follows- 1. Ashleigh Barty, 2. Naomi Osaka, 3. Simona Halep, 4. Elina Svitolina, 5. Aryna Sabalenka, 6. Karolina Pliskova, 7. Kiki Bertens, 8. Belinda Bencic. Among them, Simona Halep, Kiki Bertens are former champions. Another champion of the tournament, Petra Kvitova, will also participate in this year’s Madrid Open after missing it last term. Kvitova faces Marie Bouzkova in the first round. Ashleigh Barty faced American Shelby Rogers in the first round and came out on top. Coming off her third title of the season, Barty sparkled in 6-2, 6-1 victory in the first round.

Other notable top-half first-round matches will be-  Angelique Kerber vs. Marketa Voundrousova, Paula Badosa vs. Barbora Krejcikova, Johanna Konta vs. Yulia Putintseva, Garbiñe Muguruza vs. Sloane Stephens. In the bottom half, notable matches in first round will include- Jessica Pegula vs. Sorana Cirstea, Simona Halep vs. Sara Sorribes Tormo, Karolina Pliskova vs. Coco Gauff, Anastasia Pavlyuchenkova vs. Madison Keys, Svetlana Kuznetsova vs. Jelena Ostapenko, Jennifer Brady vs. Venus Williams, Maria Sakkari vs. Amanda Anisimova. The reigning Australian Open champion Naomi Osaka will face a qualifier in the first round to start her clay season. If she wins she will face either Australian Open semifinalist Karolina Muchova or China’s Wang Qiang. Simona Halep and Kiki Bartens are also contenders for this year’s title as they are probably the purest clay courter in the tournament.